Today, we’re sharing four sweet adoption stories that will warm your hearts – from a homeless pup whose life is turned around, to the tiniest kittens rescued in a storm, these stories are bound to brighten up your Monday…

Steve and his senior pets:

When Steve Greig’s dog died, he felt as though he had lost a best friend. In search of a new companion, Steve went to his local shelter, where he fell in love with 12-year old Eeyore, a Chihuahua with four bad knees a heart murmur. Visit Steve’s house today, and you’ll be greeted by ten senior dogs (plus a pig). His reason? “When any pet dies, the pain can be so intense and heartbreaking that many people will try to avoid this again at all costs. But, if, when a pet dies, you allow another one to live in their place, it is incredibly powerful. You have both honored your fallen pet’s life and given dignity to another that probably wouldn’t have had that opportunity.”

Kitties Rescued by US Marines 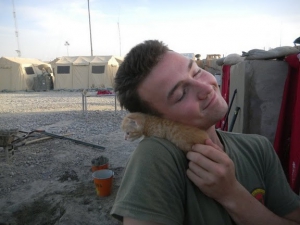 For US troops in Afghanistan, there’s an unlikely source for comfort and cuddles: stray kittens. With generous donations, three US marine soldiers have successfully started a mission to find forever homes for these stray cats that come asking for company and food. Life seemed grim for Keykey the cat, until she was found by soldier Chris Berry and nursed back to health while deployed in Afghanistan. Keykey now lives happily with Chris’ parents in Houston, Texas, and patiently waits for her dad to come home.

Sully: From Sick to Spoiled

When Sully the dog was picked up by animal control on the streets of Georgia, he was very sick and afraid, and his chance of survival was uncertain. After a trip to the local veterinarian, he was transferred to First Coast No More Homeless Pets (FCNMHP) where a miracle happened: Sully began his long journey of healing, and a staff member, Brianna Jackson, fell in love with the sweet pup. “He was very sick, and his blood count was so low he shouldn’t have been alive,” she remembers, “He was going to need an adopter or foster that would provide him round-the-lock care – I was really worried about him.” You might see where this is going. We’re happy to report that the love at first sight was mutual, and Sully and Brianna are now inseparable.

The Tiniest Little Kittens that Could 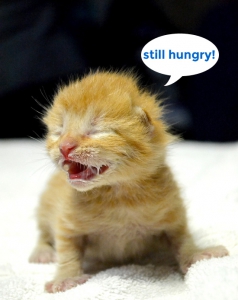 In early March, three teeny kittens were found clinging to a storm drain in Southern California, after El Nino flooded the streets. Luckily, a nearby worker was able to immediately take them to safety, where a friend began nursing them back to health. Tiny and hungry and with an insatiable appetite, these three little kittens (adorably named Squash, Scone, and Sushi) took to a bottle right away. As you can see, their foster sister, Roxie, takes her job of “kitten warmer” very seriously.