Yes or No: Dogs in the Bed 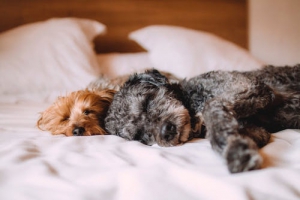 It’s the ultimate pet do or don’t: dogs in the bed. ​Some pet owners love cuddling up with Fido at the end of every day, while others say there is nothing worse than waking up with a paw to the stomach….

The topic makes the rounds every now and again, and this time, the buzz online is about a recent study in which 40 dogs were tracked with a device as they slept in bed with their owners. The study showed that over the course of seven days, both the humans and the dogs slept reasonably well. The dog owners were also required to keep a sleep diary and wear a device that tracked their sleep — they reported sleeping only slightly better with the dogs off the bed, but not by much.

Interestingly, the dogs’ sleep quality stayed the same regardless of where they slept, which is good to know for any owners who are thinking about transitioning their dogs off the bed and worrying that their pooch won’t sleep as well or as happily. For any pet owners concerned that letting their four-legged friend sleep in bed will give the dog the wrong idea about who’s in charge, you needn’t worry. “Dogs can distinguish between the relationship with its human fellows and other dogs, and the ways in which they regulate their interactions with humans in the house is not trying to establish a hierarchy,” says Dr. Siracusa in this article.

So – should dogs sleep on or off the bed? At the end of the day, it’s totally and completely up to you. We say, do what makes you happy. As long as you and your furry pal are waking up rested, we say there is no right or wrong way to do it!