Cat Owners: Your Cat is Left or Right “Pawed”

Every once in awhile, something new comes out about our furry felines that takes us by surprise. Recently, it’s been the discovery that cats are laterally biased, meaning they favor one paw over the other. The preference varies from feline to feline — just like humans are born left or right-handed, and because it’s a relatively new discovery, there’s still much to learn. Here’s what we know so far…

According to a new study by Animal Behaviour, 44 felines (24 male, 20 female) — young and old and of varying breeds — were tested in a low-stress study conducted in their homes. Owners were asked to observe and keep track of their cat’s behavior when it came to their paws, including how they stepped over things, went down stairs, and reached for food. The results? Male cats favored their left paw, whereas female cats were more likely to use their right.

The gender difference is interesting – and means more research may be needed before we can fully understand why this difference exists. So far, Deborah Wells from the Animal Behaviour Centre has a few fascinating ideas. Limb preference might be an indicator of how well an animal handles stress, she speculates, so a cat that is left “pawed” might show stronger fear responses or aggression. Does that mean male cats are more likely to be aggressive? Not exactly. “Further work is needed to investigate this,” says Wells, “But the strong sex effects reported here, and elsewhere…point more and more strongly to underlying differences in the neural architecture of male and female animals.”

There is still much to learn about this new discovery. Cats join other animals – horses, dogs, apes and whales to name a few — that show lateral bias. We look forward to hearing more about this and are constantly reminded that there is so much still to learn about our beloved four-legged friends!

What is Whisker Fatigue? 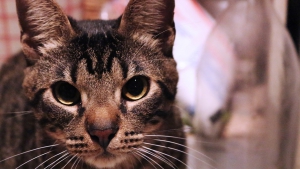 Whisker fatigue has been making the rounds online after an article published in the New York Times stated it could be the reason why some finicky cats struggle to eat out of bowls. When they lower their heads into the bowl, the article explains, their ultra-sensitive whiskers come in contact with the sides, resulting in repeated stress.

It’s a real thing, promises Dr. Catsby’s, a website that sells whisker-friendly and ergonomic food bowls. But even the most fanatic cat-people are skeptical of this claim. After all, states this opposing article, the phenomenon has never been acknowledged or backed by veterinarians, animal medical centers, or research labs focusing on cat disorders.

The problem? While there’s no harm in theorizing about picky cats, there is a growing concern that putting a name on something unproven could result in cat owners assuming whisker fatigue is to blame for appetite loss, rather than seeking proper medical care. The takeaway lesson? Felines with a decreased appetite should always be taken to the vet, whisker theories aside.

What are your thoughts on whisker fatigue? Please share in the comments below!