Part 1: Why Are Cats Picky Eaters? 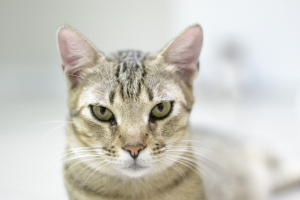 It’s not just little kids that can be picky eaters – if you have a cat, chances are high that he or she has turned his nose up to his dinner at some point in time. The reason? It’s probably a mix of behavioral as well as evolutionary. In the wild, cats hunt and eat frequently – up to 12 times a day, so they have the privilege of not scarfing down their meals to sustain them for the week. In fact, even in the wild, cats are known to “play” with their food, suggesting that they may even find enjoyment from their meals and less pressure to finish quickly as they are not sharing it with other felines.

While cat’s noses are not as powerful as dogs, aroma still plays an important role in what smells tasty and appetizing to them. Cold food, for example, might be less appealing to a furry feline because it doesn’t smell as strong. It’s also worth considering the way cats eat and how they use their teeth to rip and tear (for example, when eating a mouse). Moist food that offers opportunity to shred may be easier for a cat than dry food, which is often swallowed whole.

We know that cats are hypercarnivores, preferring foods high in protein and even detecting high protein levels in what they eat. When presented with three flavored wet foods in a recent study, cats chose fish out of a sample of rabbit, fish, and orange flavored food. It’s been hypothesized that cats are often unwilling to try a food that is new or different to them because it could lead to an upset stomach.

Lastly, It’s important to keep in mind that an ideal cat food hits all the nutrition requirements – providing the proper vitamins, minerals and nutrients needed to keep your cat at its healthiest.