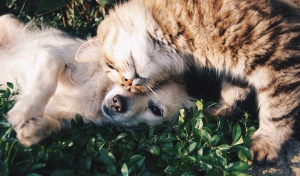 Past studies have shown that dogs and humans have similar memories; we both recall past experiences episodically and with great detail. For example, when thinking back on a concert I attended last year, I remember my friend wore a blue dress, and that it rained on the way home. Studies over the years have shown that dogs remember in the same autobiographical fashion – connecting their own experience to the memory (this would explain why, when a dog has a bad experience at a vet, he’s less than thrilled to go back).

But how do cats remember? To find out, researchers fed 49 cats various types of food out of different bowls. They did this several times and took note of which food the cats liked best, also recording which bowl was used (i.e. tuna in the green bowl). Later, when presenting the cats with more food, this time in different bowls, they found that the cats looked for the green bowl that previously contained the tuna. Similar to dogs, the cats were able to remember specific details surrounding their preference.

While cats and dogs will always have their differences, we’re happy to highlight some of the ways our furry pals are similar. With time and research, we’re looking forward to learning more about our complicated and lovable four-legged companions!

Is My Cat Lonely?

Do cats ever feel lonely? Every cat is different; some felines are content to entertain themselves during the day, while…

One thing we know for sure: cats like boxes. It’s indisputable! Put a cardboard box in front of a cat,…