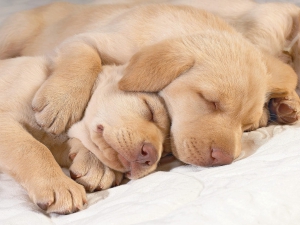 Type “dog dreaming” into YouTube and you will be presented with thousands upon thousands of sleeping canine videos – some with over 7 million views! While it appears as though these dogs must be dreaming of digging holes and running through fields, the topic has been up for debate for some time…

Like humans, dogs experience cycled sleeping, and they go in and out of a deep REM (Rapid Eye Movement) sleep, which is where we experience our most vivid dreams. In an experiment using rats, scientists traced the smart rodent’s brain activity as they raced around a tricky maze, and later slept. The findings were surprising: both brain movements were nearly identical. The rats were, in other words, dreaming about their day in the maze.

If rats dream during their REM sleep, scientists concluded, then so must our furry canines, who have brains that are very structurally similar to ours. While we aren’t sure yet what exactly dogs are dreaming about, proof may be in the pudding: twitching legs could be indication of a running dream, a wagging tail could be a playing dream. One word of advice: let dreaming dogs dream. Waking up or startling a pup in a deep sleep could result in an unintended bite.