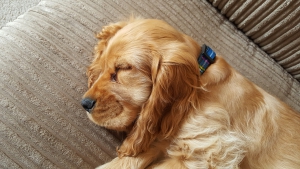 It’s widely understood that dogs dream. If you have a pup, you’ve inevitably witnessed an active dream of some sort, and I’ve seen it all with my furry companion, Juniper (I’m convinced she dreams about playing with her best friend, Luna, and chasing bunnies. Lots of bunnies). While we’ll never know for certain what exactly our furry pets dream about from day to day, researchers have made strides in decoding a sleeping canine’s brain. Spoiler alert – it’s not that different from our own. Here’s what we know so far…

For starters, dogs sleep more than humans do, and they enter REM sleep quite quickly. In fact, dogs spend 23 percent of their time in slow-wave sleep, which is considered the deepest form of sleeping (lucky them!). It is in REM sleep and slow-wave sleep where the most vivid dreams occur.

In a famous sleep study conducted with rats, researchers placed the rodents in a maze, where the creatures’ brain activity was monitored as they spent all day running around. Later, when tracking the rat’s brain during their REM sleep, the same areas lit up, implying that the rats were most likely dreaming about their busy day in the maze. This is true for humans too (i.e., we spend all day catching up on errands and house work and later dream about doing laundry) and is thought to be the same for dogs.

Most reaffirming of all is the study in which researchers temporarily “deactivated” the pons in sleeping canines. The pons are part of the brainstem responsible for keeping muscles paralyzed in sleep so that mammals stay safe and still during slumber. Under monitored circumstances, the sleeping dogs began to “act out” their dreams. “What we’ve basically found is that dogs dream doggy things. Pointers will point at dream birds, and Doberman Pinschers will chase dream burglars. The dream pattern in dogs seems to be very similar to the dream pattern in humans,” according to the researchers conducting the study.

Next time Fido looks like he’s dreaming about snatching a fresh piece of steak off the kitchen counter, chances are, he is!

Is your dog an active sleeper? We’d love to hear in the comment section below!

Does My Dog Have Spring Allergies?